Shopping Cart
Your Cart is Empty
Quantity:
Subtotal
Taxes
Shipping
Total
There was an error with PayPalClick here to try again

Thank you for your business!You should be receiving an order confirmation from Paypal shortly.Exit Shopping Cart

An ongoing series of informational entries

We have made it to our third year in business.  Learning a lot along the way, we continue to grow as a company. When doing business in a small town the best advertisement is word of mouth.  For the longest time we where known more nationally and around the world with our multi-media presence. So with that in mind  we have been really active in the community and work hard to provide excellent customer service.  All the hard work is starting to pay off.   This has been the busiest winter since we started.  A big thank you goes out to the folks in NE Nevada that support us! -Mark & Kelly

Last year was the first time we attended the Gambler500 in Oregon. Needless to say it was an absolute blast, and we met some really great people!  So on that note I fell in love with this car.  Its a 1991 Caprice Classic on 33's and enough off road lighting to light up a small town.  Finally in December I pulled the trigger and committed to getting it.  So, we now have a  cool machine that will be seen at events that we are attending.   It will have some custom work in the future, so stay tuned for updates.  -Mark

It is official now we are a sponsor for the "Team Outcast" funny car for the 2019 season.   We will be racing in the CIFCA (California Independent Funny Car Association.  First race of the season will be the first weekend in April.

Look for the purple beast in the pic! -Mark

Tomorrow we will have our new spray booth in for powder & cerakoting.  Super excited to get this installed in our shop.  Big thanks to The Fab Shop in Minnesota.  Love their equipment!

RIDE FOR THE RACKS

We are one of the primary sponsors for the 2nd Annual Ride for the Racks poker run.  This is a a great fund raiser to help promote breast cancer awareness.  Come see us at the "Watering Hole" in Spring Creek, NV May 4th.  - Kelly 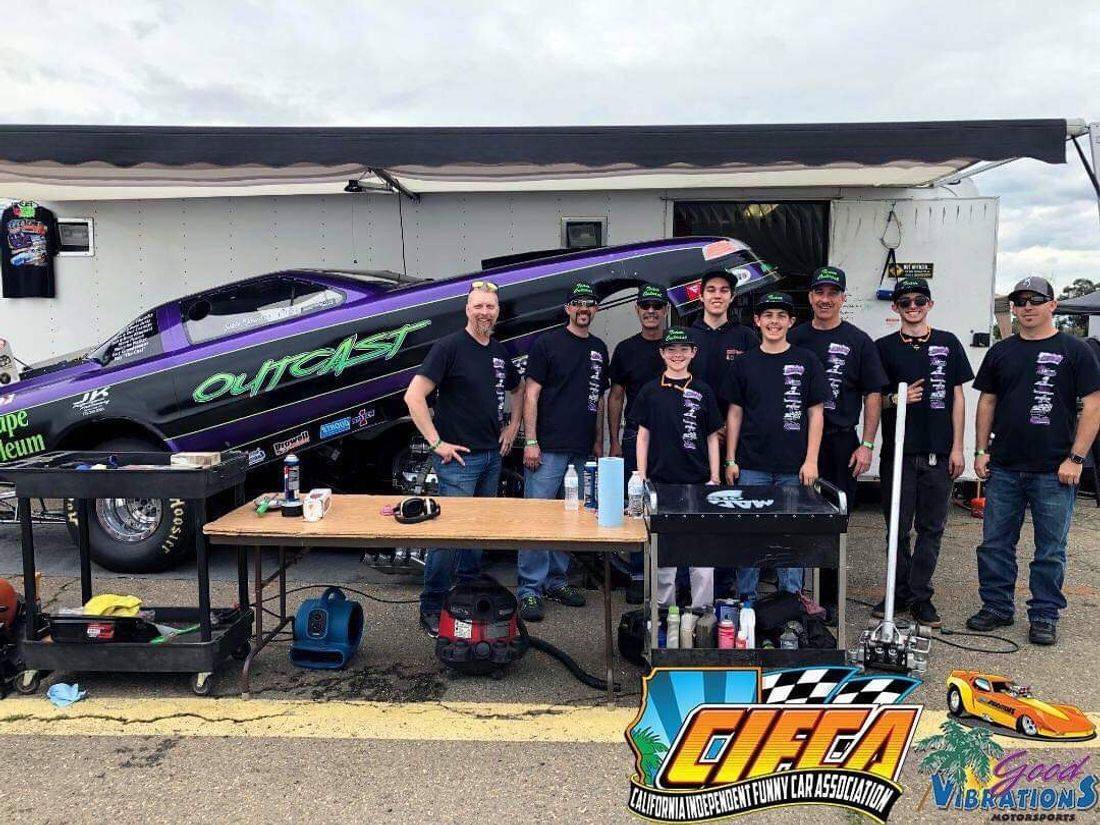 Had a great weekend in Sacramento

California.  Super excited to not only be a sponsor, but now a crew member! It was a surreal moment to be in the pits,working on the car and being at the starting line!  As a business we are looking forward to great things in 2019.  Thank you to our customers and friends along the way that have supported us.  We are humbled 😉🤙🏻

Happy to have our new booth in operation.   The old booth made it three years, built from scratch.   I was time to replace the old with the new. Thanks to the Fab Shop for doing a nice job building it for us.

Had a great road trip down to Vegas for the weekend. Met really great folks and made some new business contacts as well.   Had to tag one of the most iconic signs in Nevada...again!

Gambler 500 Wheel Give a Way

So we got a little behind schedule for giving these wheels away.   So these are now on track to getting these to a new  owner later this week.  We are super excited to be part of this year's Gambler 500.

After weeks of preparation, planning, repairs, replacement parts, etc., we headed out for the Gambler500 in Oregon.  Worked out a few issues along the way, but, getting a full tank of super unleaded, she ran great up and over the high passes of northern Nevada.   Stopped in Winnemucca for a lunch break and stretch.   Proceeded to head north on Hwy 95 just before the Winnemucca dunes and just like that a large cloud of billowing smoke rolled out from the "Caprice Runner"!   You guessed it the only thing that I did not check or go through....  Damn!  Lost the tranny before we got to No-Man's land.  So that was a blessing in disguise of some sorts.   We were done.   Sent the other half of our group onward to Oregon to represent!  After a large tow bill later and a 2 hr ride home, the whiskey came out and drowned our sorrows!   There is always 2020!

Slow at the shop, heading to SOCAL!

I have been working as a government contractor to help manage and run aerial fire fighting operations around the US.  This year I found myself back in SoCal for a month and a half to help with their wildland fire fighting efforts.  So in-between assignments I would work the shop for two weeks and leave for two weeks.  Kept a pretty busy schedule!

Time for a quick break from the craziness of our schedules and get out of town.  Our business trip to Vegas was a great!  Got to meet some really cool folks and avoided the strip!  LOL  Lots of sight seeing on the way back through the desert.

Thank you, Pete Ortiz!  Setting records and sending it down the track for the 2019 season.   How many Alcohol blown funny cars do you know that can beat a Nitro car and a Jet car in the same night?  Well this beautiful machine did!   Season ended early after hurting the motor pretty bad, but 2020 is going to have a facelift and a new power plant!

Passing of a Legend.

Longtime friend and companion Ellie (aka: motherlovenub, nubstar, the freakshow)  lost her battle in life due to health complications.  She was always there to check on me in the shop to make sure I was ok, and always had to go in first to make sure everything was good before I started my day.  You will be missed!  Love ya Nubbie...

Made it on the Board of Directors...

It took two years, but I made it on the Board of Directors for the Elko Chamber of Commerce.  Want to give a huge shout out to our community and business owners that voted for me.  Looking forward to serving our community!

Caprice Runner is coming back in 2020

Yes those are 35" BFG Baja TA's!  Yes, they are going on the car!  Have some work cut out and planning ahead to run long travel on this beast.  Why???  Because we can and no one else has done it.   Its going to be like pre-running driving your couch.    So, stay tuned!

We are happy to have this year coming to an end.  2019 started out strong and then kicked us in the junk!  The second half of the year was rough to say the least.  Considered selling the business and moving on to greener pastures. Tried to Richard Rawlins stuff on a Sanford and Son budget...LOL!  However, looking to our 4th year coming up with the beginning of a new decade...We are going for it, a lot wiser, and have some great projects planned.  So, stay tuned!  Happy 2020!!

Here we are almost through the first month of the year.   Things are going well!  Have been working on bigger projects and have been doing more custom work.  We have our new price matrix posted on our Facebook page to give customers a better idea on the costs for our shop.  Feel that is better to keep customers informed so they can budget for our services.  Any work over 100.00 will require a 20% down prior to start of work.

This was an awesome challenge to do for one of our customers.  When this came in the original powder coating was in really rough shape.  Many hours removing the old material, while protecting the original pieces.  It was well worth the effort.  Our customer loved the attention to detail and the care we took to complete this awesome project.  Checkout our gallery for the before and after pictures.

Everything is installed and back in the Viper!  Customer is super stoked with our work and how it turned out.  Thank you so much for this project and taking our game to a new level!

We are huge supporters of Veterans groups and programs locally and around the country.  So when we where selected to do this project, well needless to say we said yes. This Jeep Gladiator is a rolling memorial that will be seen around the country.  Hope you get a chance to check it out!  For more info check them out on Facebook and Instagram.

Despite all the craziness of some folks in the world, we are still in operation during this time.  We get out into our local community and show our support.  Be a humanitarian to those in need, even if its just a smile and showing that you care.  For our local customers we offer pickup and delivery at no charge.  We will all get through this folks and it will make us stronger than before.

Slowly soda blasting and restoring a 70 year old hand carved Japanese hope chest. These where purchased by GI’s post WW2 and sent home to their wives. We don’t normally work on these but, I jumped at the chance to up my game.

Time to look at expanding!

After the past few months we have had to turn jobs down due to our ability to fit pieces in our oven as well as increasing our blasting ability.  On that note we are starting the process towards building a bigger shop, 10x10x30ft oven and spray booth, dustless blasting system, etc.  This will be about a 12 month endeavor to get all the right pieces moving. Looking forward to a new chapter.

Things are getting "Squatchy" around here!

This past weekend we made it to "Art in the park" here in Elko. While checking out the vendors we ran into Bartlett Artworks out of Twin Falls, ID.  They create all there own designs and do some pretty killer stuff.  So, what did we do??  We are teaming up with them to bring our "Sasquatch" series of yard art.  If things go well and they are popular you will see more of these.  Check out our store for current availability and colors in stock.  -Mark